On September 15 the legendary race “TOR DES GÉANTS” (“Tour of the Giants”), 330 km – 24000m D+, was closed.  Trail Running School athlete Alex Ouziel was one of 534 participants who managed to finish in this difficult race in the mountains of Italy.

– Alex, congratulations on fact that you became one of those who managed to overcome this most difficult distance and improved your 2016 result by almost 9 hours! What makes you so attractive to «TOR DES GÉANTS»?

– The first time I came here I expected it to be a race like the others, just a bit longer. However, it was so much more. Starting with how the people of the Val d’Aosta live and support « il Tor », for them this is a symbol of who they are in a land that is as beautiful as it is hard. 31,000+ vertical meters (all posters say 24,000+ and then when you finish the final report shows 30,900+) drain you little by little, and sooner or later you find your limits, your dark side, it is at that point that you find out if you have what it takes to go all the way. It is a life journey more than a race.

– How long have you started to participate in trailrunning competitions? Have you had any running experience before?

– I started running with a training plan in 2012 when I decided to enter the Athens marathon. It was supposed to be a one time thing but as soon as I finished it (2h39m) I knew that I would keep running. I used to live in Geneva and spend most of my weekends in the French Alps, so it was difficult to find flat areas to train and in 2013 when the first Samoens Trail Tour race was organized (51km and 3,000m+) I knew that i had to try it. 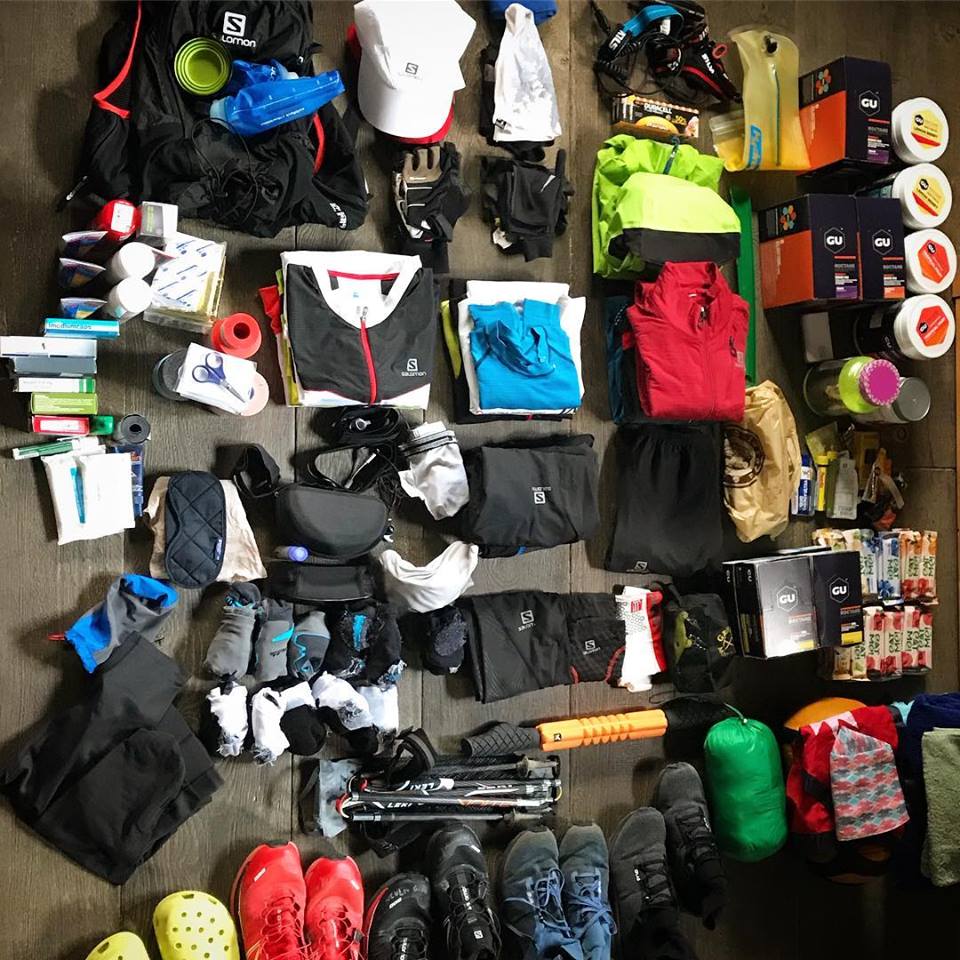 – How did you find out about “TOR DES GÉANTS” and at what point did you understand that you should certainly finish in this race?

– In 2016 I applied for the UTMB but did not get a place in the lottery. Frustrated I entered the lottery of Tor des Geants, never expecting that I would get a place. Then surprise, I do!, so there was no other option but to train for it. It was both scary and exciting.

– How did you meet Dmitry and Ekaterina Mityaevs and how did you become an athlete at the Trailrunning School?

– I met Katya and Dima at the 2015 Elbrus World Race. We stayed in touch and met again in the French Alps in spring 2016 when Dima suggested that I join Trailrunning School to better prepare Tor des Geants. Ever since that day, the first thing I do every morning is check my TrainingPeaks plan. 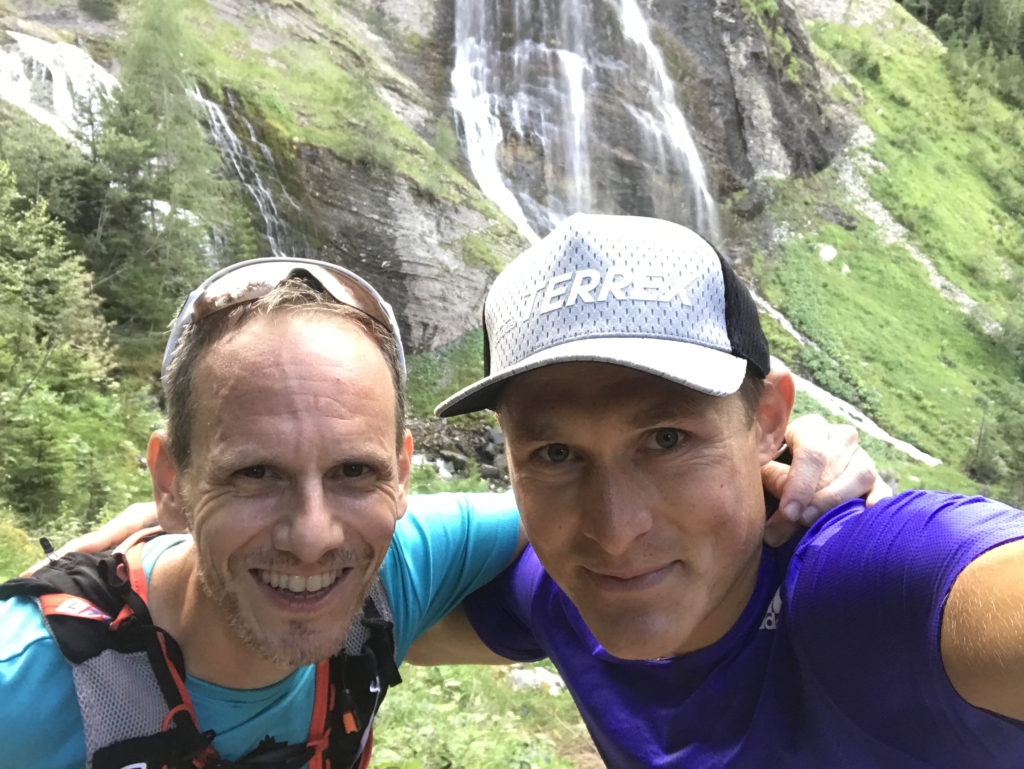 – In 2016 I prepared very well, but in July, just two months before the race, I fell while training in the Tbilisi mountains breaking my wrist. I had to be operated and this compromised my training just as it was getting to the critical phase. I started the race with a bandaged hand and not using my poles which meant that after the first 100km I killed my quads and suffered for the next four days.

Preparation in 2018 has been smoother, and I went to Nepal in April to run the Mustang Trail (170km 6000m+), a beautiful stage race at altitudes over 4000m. As every year I took the start of the Samoens UTHG (83km 6000m+) and was planning to return to Elbrus for the new 80km distance but had to cancel last minute due to an ankle sprain. The only minus has been that since I now live in Dubai it has been hard to do more mountain training and perhaps some very long hikes, but in general I arrived in Courmayeur feeling quite strong.

– What was your plan for this race?

– I wanted to start slower than last time, taking it easier in the first 100km. Then I wanted to make sure that I would take short sleep hours more regularly than in 2016. A small but important detail that I ignored two years ago was also to not forget to take showers and brush my teeth at regular intervals. It may sound like something silly in a race but it helped to reboot the brain. 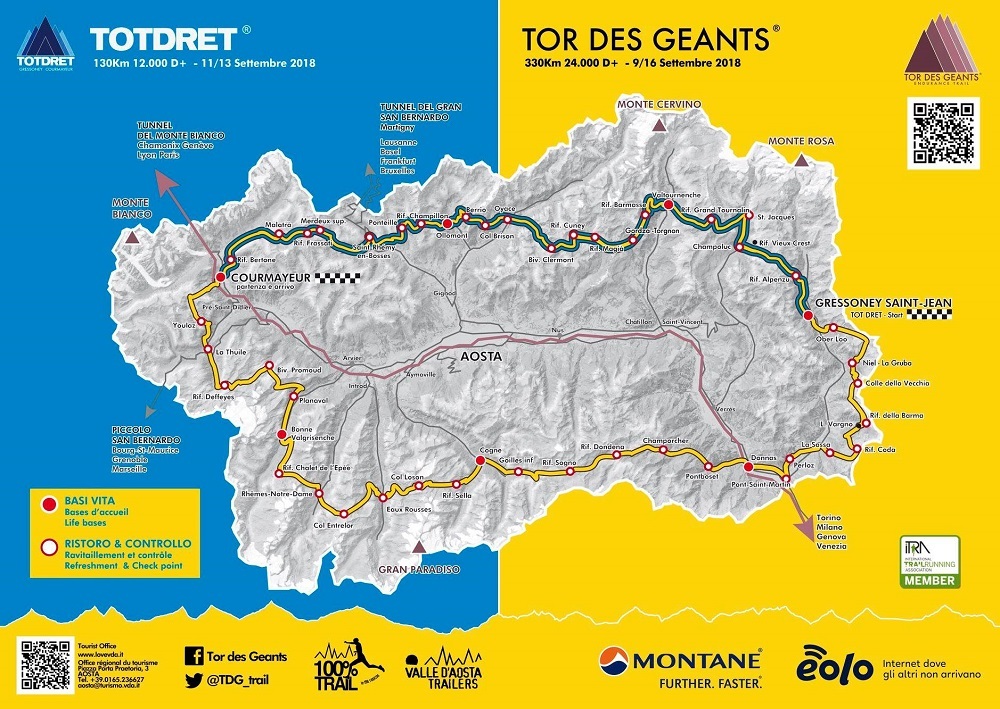 – Did you set any goals for the approximate time to get the finish line?

– I made a plan to complete the race in 120 hours. In Tor des Geants, the first thing to go wrong however is the plan, so it is more like a compass for direction than a chronograph for time keeping. Until Valtournenche (239km), finishing in 120hrs was a realistic option, after that we needed to start to improvise a bit. 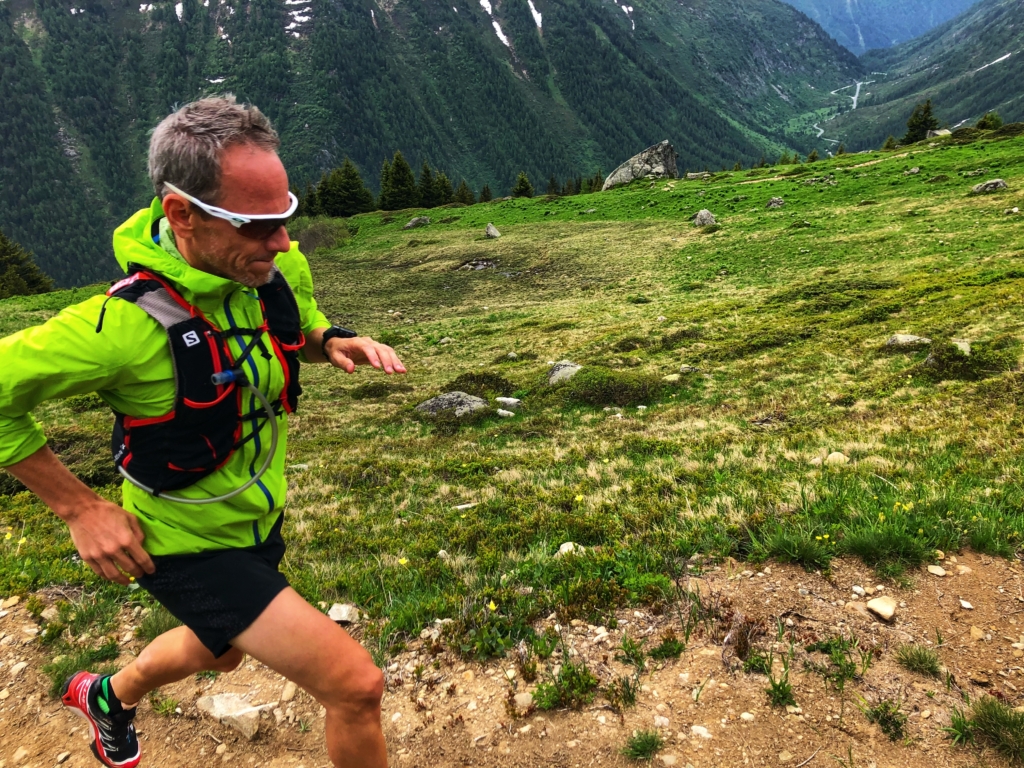 – How do you value your form, which came up with the “Tour”? Did everyone succeed in the distance?

– I am very happy with the result as the first objective was always to finish and the second to beat my 2016 time, which I did by 9hrs. More importantly I felt much more in control this year and was able to «enjoy » the race much more. Physical form allowed this and my quads held up the whole race, but as important was the mental strength which kept me strong, specially during the tougher sections.

– Which moment during the race was the toughest for you in your moving on to the desired finish?

– As I said, I felt really good until Valtournenche, and decided to take a long sleep at the base (2h45min) so that I would feel strong for the next section which had been really difficult in 2016. In the map it looks like it is quite flat, but it is long and quite tricky. My feet had started to swollen and I changed into a larger size old pair of shoes which I thought would make the trick. I had started to get blisters and regularly drained them and taped them up, however they kept rubbing against the shoes and soon every step was like walking on broken glass. When this happens there is no option but to bite hard and keep going one step at a time. After sleeping a few hours in Ollomont (287km), my feet really really swallowed and I had to improvise a solution to keep going. Jake who was supporting me asked around the food station if someone had a pair of shoes two sizes higher than mine and I was able to borrow the second pair from a German runner Daniel Heideck, funnily enough I ran the last 50km and finished the race with a strangers shoes.

– How much time did you spend for sleeping and resting on a distance?

– What was your support team at food stations and life bases?

– My friends Jake and Adrianne were there with me for the full race. They took care of all the nutrition and making sure that I got on my feet and on the road after the agreed rest time. Doing it without them would have been at least twice as hard, they were great!

– Sometimes happened the Tour’s route was closed ahead of schedule due to adverse weather conditions. What was the weather like this time?

-This year we got good weather. I know there was some hard rain in Donnas, but after I had passed the area so it did not affect me. The main problem with the weather this year, was perhaps that it was too hot if anything. 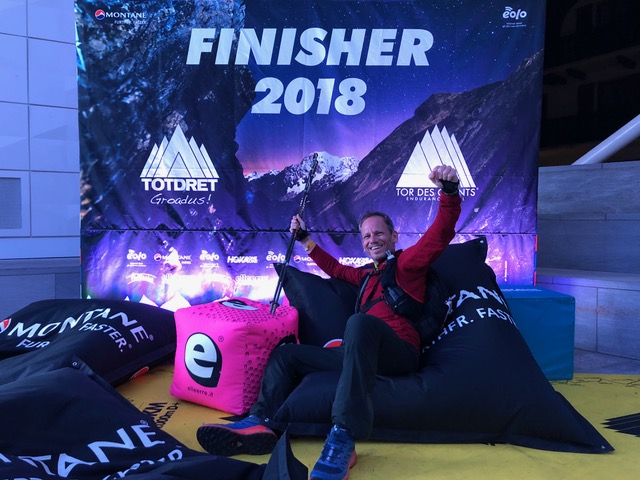 – Can you remember your emotions when remain just a small part of distance before the long-awaited finish. And what did you feel when saw Courmayeur from the last peak?

-The emotions started to get to my skin from the arrival to Bosses about 30km from the finish. After this there is only the last climb to Malatra left and you know that you will make it to Courmayeur even if you need to crawl, as I entered the water station at Bosses I was almost crying with happiness.

– Which qualities do you think should have a person who has decided to participate in the ‘TOR DES GÉANTS’ in order to reach the finish arch?

– The love for adventure, the determination to never give up and the ability to improvise.

– Now having  rest from “TOR DES GÉANTS”, do you think about returning for your third time?

– After the first time, I told my wife Lia to hit me really hard if I ever thought of coming back. This time I said would be the last … but is a hat-trick possible and how much faster could I go are interesting questions? 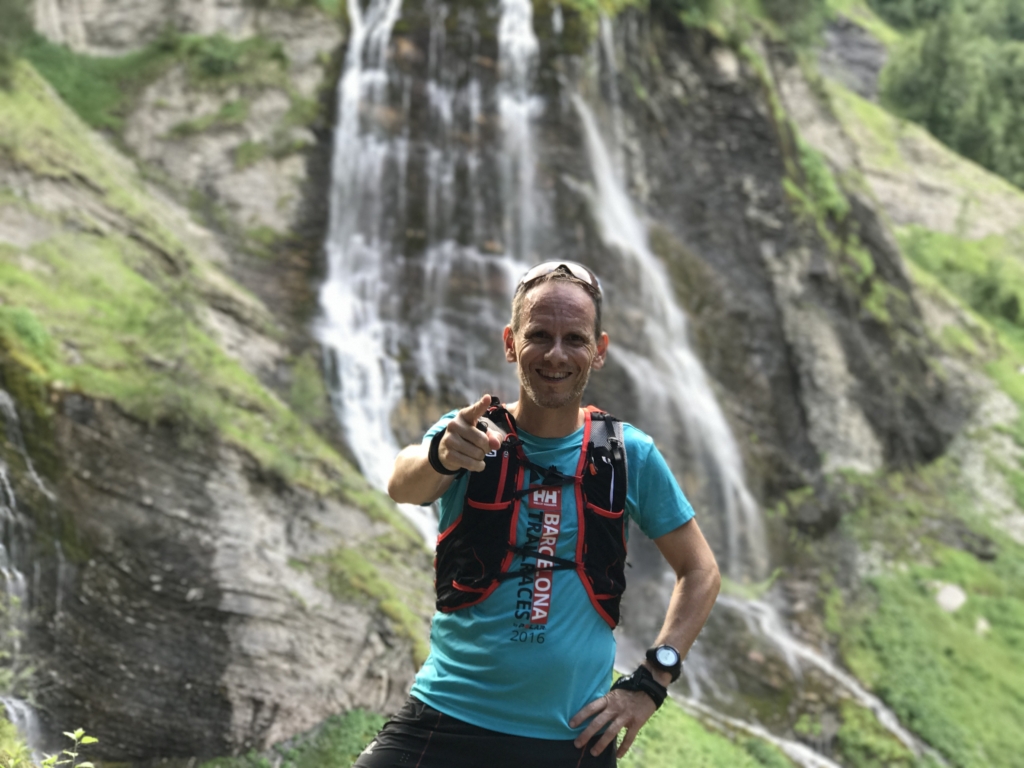 – This season you started with a staged, multi-day, 100-mile Mustang Trail Race in Nepal. Why did you choose this exactly such a long race for the very beginning? Did your coach immediately approve your choice?

– I love Nepal and thought that the race in high altitude would not only be very beautiful but also perhaps good training. The fact that it was in stages made it easier so early in the season, and Dima was supportive from the start.

– How do you rate this phased format of the competition? Do you have a desire to run something similar, for example, the famous “Transalpine-Run”?

– It was my first stage race and it was a good surprise. Having a night to recover makes it very different and it is good to start strong every morning, even if tiredness grows in the later stages and the finishes are harder. I think that long stage races are a perfect way of preparing for Tor. Transalpine run, Crimea X Run would be fun indeed.

– Perhaps after your visit to Nepal on your Facebook page you called for help in buying computers for a school in the town of Gerkhutar, which was affected by the 2015 earthquake. How did you find out about this school and how is the fundraising going?

– In 2014 we mountain biked the Annapurna trail with two friends. It was a great adventure taking the bikes to 5400 meters and then doing 1000 vertical meters of descent on the snow. During the trip I became good friends with our guide Bibek and when the earthquake crisis hit in 2015 we were in touch to see how we could help. He is from Gerkhutar and when I ran the Elbrus World Race that year I was able to raise money to help rebuild part of the school. This year I was finally able to visit them before the Mustang race and we saw an opportunity to raise funds to help give the school new computers. Tor des Geants has inspired lot of people to contribute and we have already raised over $3000 which will help us buy 10 new computers and printers that the students will be able to use very soon. Running is a lot of fun, but when there is an extra purpose it makes it even more satisfying.

– What are your impressions from Nepal? Will you return there again?

– I love Nepal and its people, who are the happiest people that I have ever met. They are not rich in money but they have the richest smiles. I know that I will be back to Nepal many times, my only fear is that I may want to climb one of its mountains.

– «TOR DES GÉANTS» completes your active competitive season this year, or are you planning to do something else?

– Maybe I will do a few short races in the Dubai desert and I would like to try a marathon or a triathlon after new year.

– Alex, thank you very much for your time! And new achievements on trail! 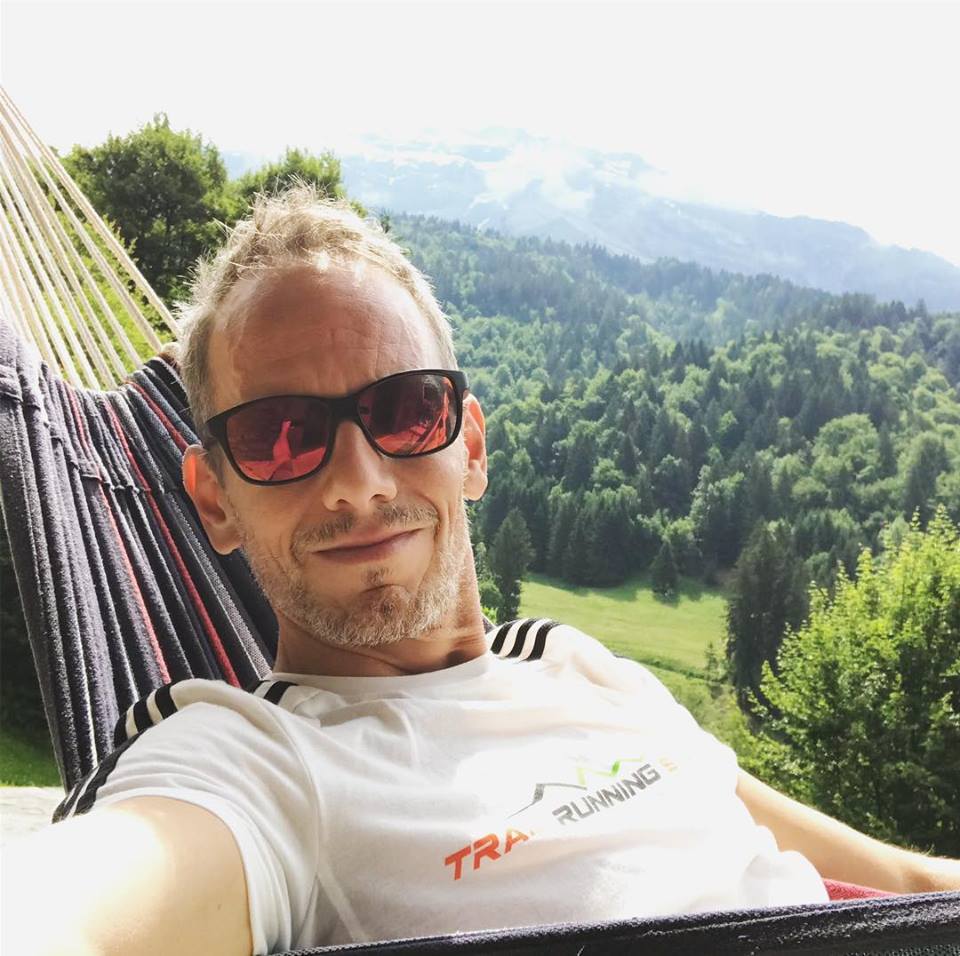 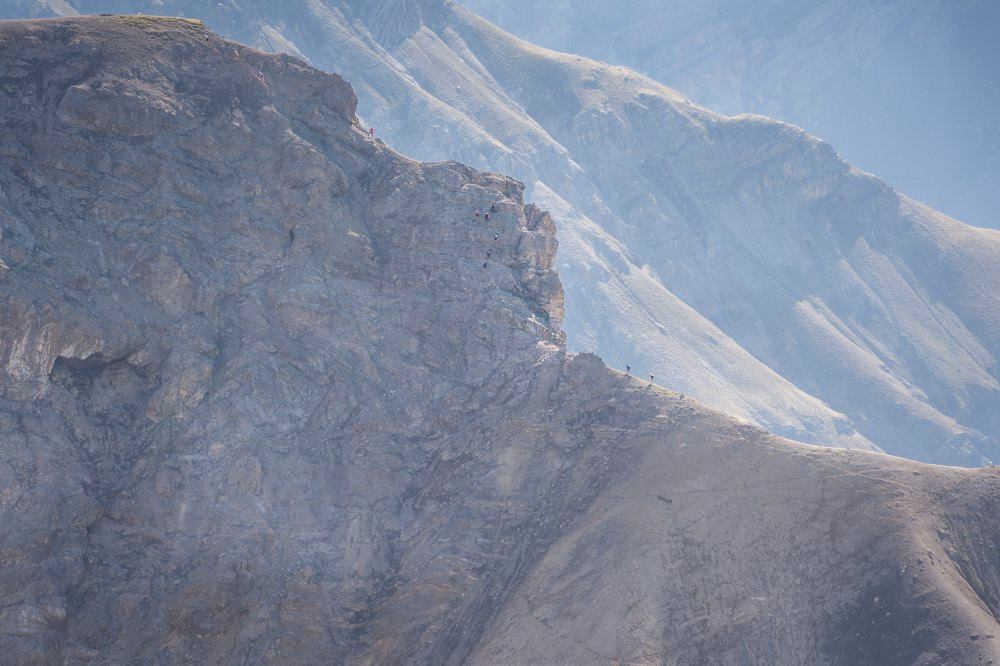 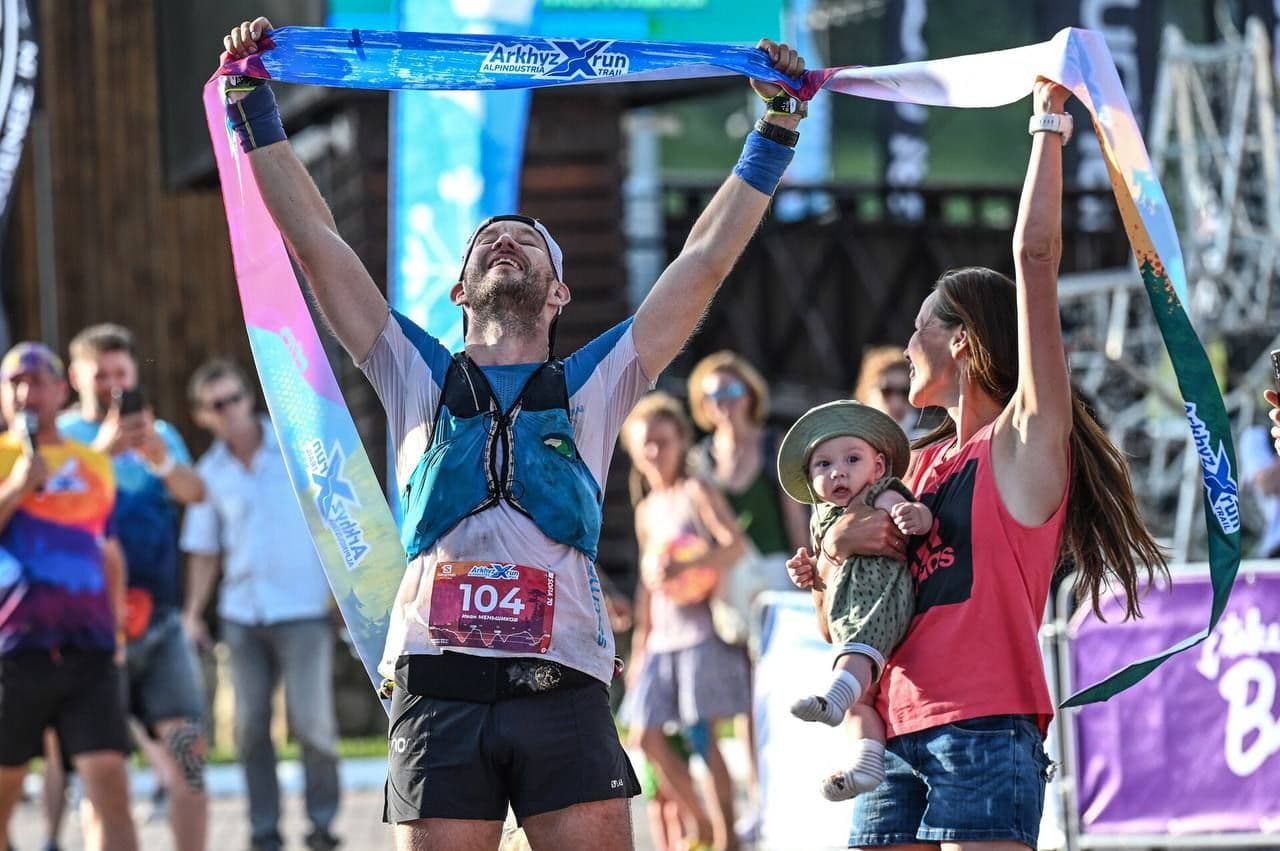 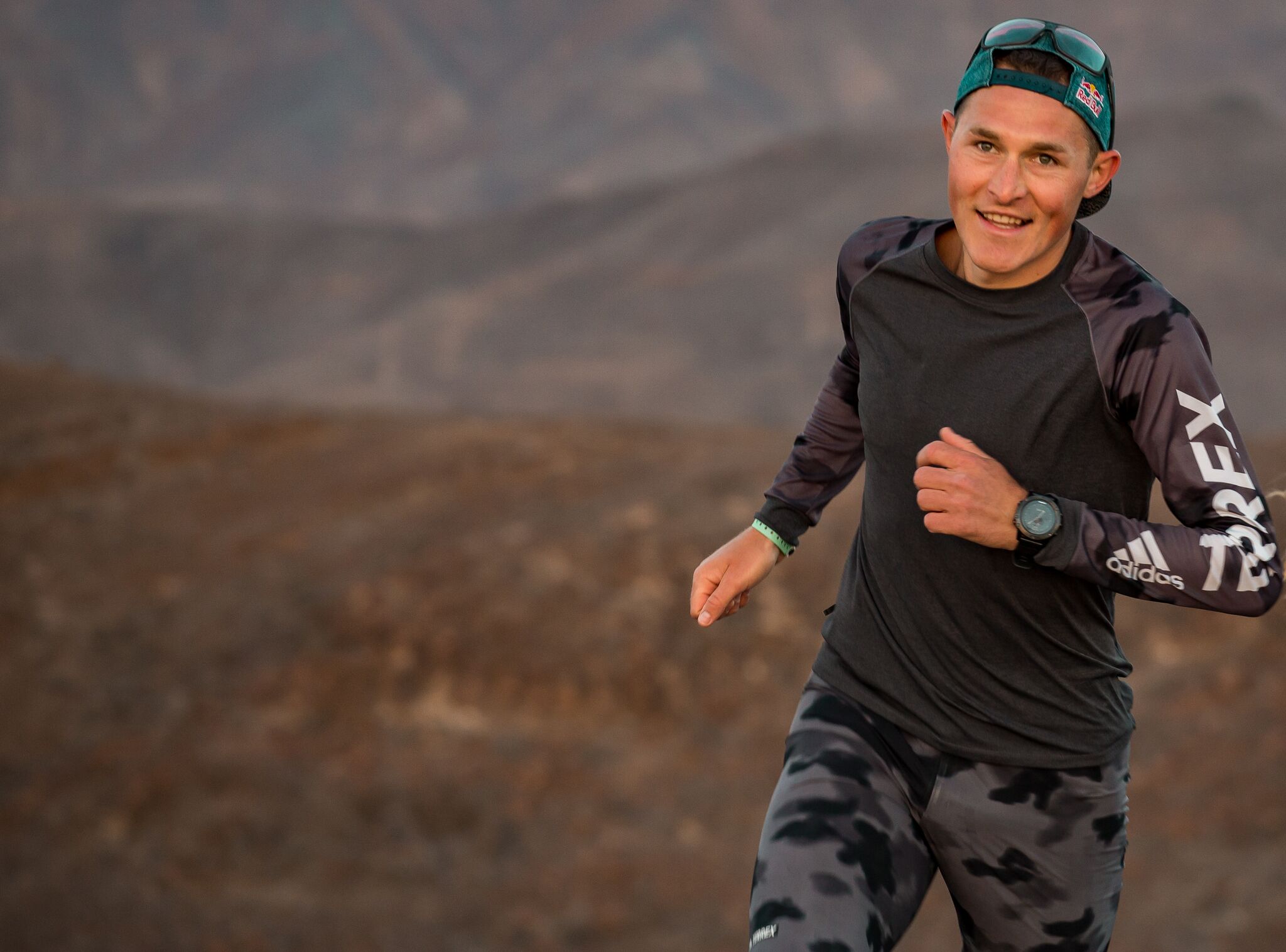 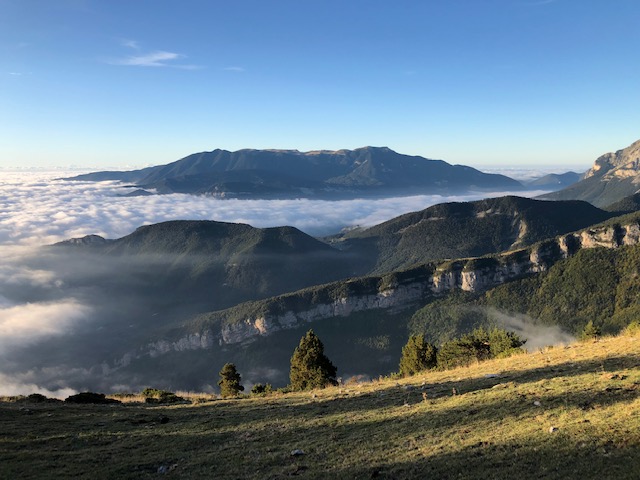 Item added to your cart

Continue Shopping Go To The Cart